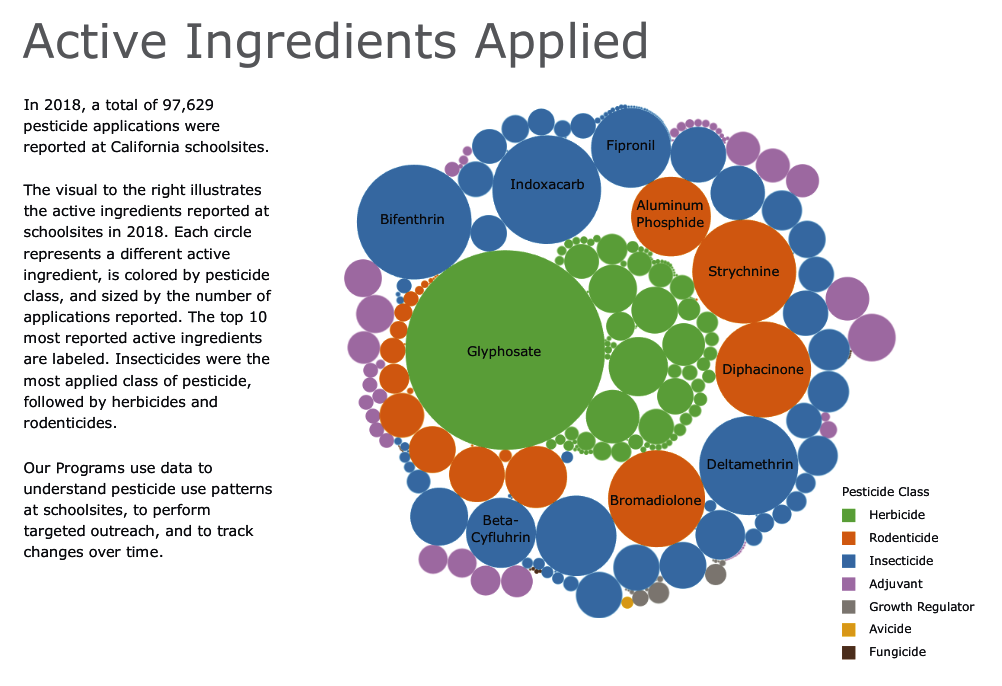 Research indicates 90% of childhood cancer, which is the second leading cause of death for children ages 0-15, is likely due to exposure to toxic chemicals, and therefore preventable.[1] Schools must take action now to protect children.

While natural substances can have pesticidal properties, such as boric acid and hydrogen peroxide, the concerns about health and environmental damage are related to manufactured pesticides containing synthetic toxic ingredients and are thus registered by the EPA. Monsanto and Bayer, two companies that developed and commercialized chemical warfare, have merged, and the world’s most popular weed killer, glyphosate, was developed from their extremely toxic and inhumane warfare chemical, Agent Orange. 25% of the world’s food supply is now controlled by an industrial chemical cartel who have created pesticides to work in conjunction with their GMO seeds leading to the detriment of soils, plant diversity, small farmers, animal and human health.[2]

Pesticides do not provide a sustainable solution to pest problems. Pesticides temporarily treat the symptom of an unhealthy ecosystem, but they do not solve the problem, in fact pesticide use inevitably causes more problems than it solves- destroying the natural balance of plants and insects and further depleting the soil, which creates a downward spiral of ever-increasing reliance on pesticides and greater and greater harm to our children, pets and planet.

CHILDREN ARE MORE VULNERABLE TO PESTICIDES

Due to developmental and behavioral characteristics, children are especially vulnerable to pesticide exposure. Children proportionately eat, drink, and breathe more per pound of body weight than adults. They have developing organ systems that cannot excrete or detoxify poisons as adults do. Children play and sit on the floor where pesticides have been applied to baseboards or crevices and engage in frequent hand-to-mouth behaviors, increasing the potential for pesticide exposure. In addition, children may not recognize or be able to avoid harmful substances.

Based on extensive research and treatment of children harmed by pesticides, The American Academy of Pediatrics issued a strong statement that children should not be exposed to any pesticides and recommended Integrated Pest Management (IPM) as a solution to reduce risk.[5]

9 of the 13 most toxic pesticides strongly linked to childhood cancer are still in use in CA, 6 of which are banned in at least 28 countries.[6]

The most common pesticides still used at CA schools are known to cause cancer, brain damage, birth defects, nervous system damage, gut health dysfunction, and behavioral problems such as ADD/ADHD in children[7]

The most commonly used pesticides at CA schools are insecticides and herbicides, followed by rodenticides. Disinfectant use isn’t reported to DPR but the use of toxic disinfectants has increased dramatically in CA schools and so have the number of calls to poison control. [8]

Glyphosate is by far the most commonly used herbicide at schools and goes by the names of: Roundup, Eraser, Rodeo, Ranger, Aqua Star, Pronto.

Indoxacarb, Fipronil, Bifenthrin, and Deltamethrin are the most common insecticides used in CA schools. Trade names include: Maxforce, Termidor, Frontline, Insecticides are linked to and increased risk of pediatric brain tumors[9][10]

Bromadiolone, Diphacinone, and strychnine are the most common rodenticides used in CA schools. Rodenticides are the cause of tens of thousands of poisonings and deaths of children, dogs, and birds each year in the US.[11]

Herbicides are pesticides used to kill weeds. weeds are just plants in the wrong place – on playgrounds, in fields, around foundations, and under fence lines. Herbicides kill weeds temporarily, then they return.

Glyphosate is the most widely used weed killer in the world. In agriculture it is made to work with Monsanto’s GMO seeds. Glyphosate is the active ingredient in Roundup. Which has garnered much attention in the media since Bayer (who bought out Monsanto)has had to pay out over $11 billion to people who have gotten cancer from the toxic herbicide. There are still 42,000 lawsuits and counting about the health effects Roundup has caused.

In 2015 the WHO classified glyphosate as a probable human carcinogen (class 2a) along with diazinon and malathion.[12]

In 2017, glyphosate was added to California’s proposition 65 lists as a carcinogen.[13]

Even though Roundup is a known carcinogen, it is still available at hardware stores and continues to be used by individuals, many school districts, some towns, Caltrans, and CA state parks.

United States lags behind the European Union and other developed nations (including China and Brazil) in protecting its people and its environment from toxic chemicals, allowing the use of 72 pesticides that have been banned or are being phased out in the European Union alone.[14]

Roundup does not only kill weeds, it has been linked to killing birds, insects, frogs, essential soil organisms, harming waterways,[16] and causing cancer in people. It is now found in about 90% of food products tested by the U.S. government—including honey.[17]